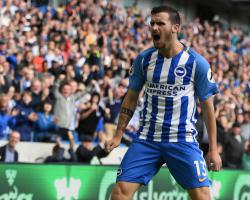 Midfielder Pascal Gross bagged a brace and laid on the third for Tomer Hemed as the Seagulls stunned Tony Pulis' usually robust Baggies.

German star Gross cost Brighton just ÃÂ£3million from Ingoldstat, and the industrious 26-year-old offered a quick-fire return on that smart investment on the south coast.

But here he was completely overshadowed by a man who fetched almost 10 times less.

Brighton had failed to find the net in the first three Premier League outings, albeit Chris Hughton's men had grabbed a goalless draw at Watford.

The hosts fully merited this maiden Premier League win and their first in the top flight since 1983, though - a victory that boss Hughton will hope to turn into a run of results.

West Brom's unbeaten start to the campaign came crashing to a halt, by contrast, leaving boss Pulis to cut a frustrated figure on the touchline.

Just when Brighton feared a dominant first half would remain unrewarded, up popped Gross with his club's maiden Premier League goal.

The home side wasted a host of half-chances in an industrious opening period, hogging territory and possession without ever carving many gilt-edged opportunities.

Shane Duffy had the ball in the net inside 15 minutes but was flagged offside, following up Solly March's shot that was spilled by Ben Foster.

Several strong bouts of build-up were let down by a poor final ball from the Seagulls, but as the half edged to a close Gross flicked home.

The ball dropped over the veteran West Brom full-back, allowing Gross to control, cut inside, and squeeze the ball past Foster

The home crowd met their side's first Premier League goal at the fourth time of asking with more relief than delight.

There could be no mistaking the elation when Gross drilled his second of the day just moments after the break, however.

Hemed trapped well into his feet, fending off Ahmed Hegazi with his back to goal, before turning a smart ball round the corner to split the West Brom defence.

Gross cantered through the centre, let fly on the run - and doubled the Seagulls' lead, and their Premier League tally.

Pulis threw on all his three West Brom replacements in a bid to reverse his side's fortunes, but Brighton kept their cool - and pounced again.

West Brom clutched at respectability thanks to James Morrison's late goal, Kieran Gibbs crossing in and Oliver Burke heading back for the opening.

The hosts had to endure a nervy final 10 minutes as West Brom continued to press, but rightfully held out for a win to kick-start their campaign.