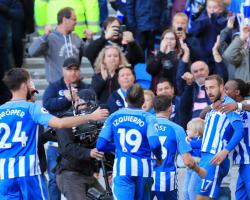 The 34-year-old, fresh from dispatching West Ham with a double nine days ago, pounced in the second half to secure a 1-1 draw for the hosts

Steven Davis had given Southampton an early lead, but the visitors were pegged back after the interval and missed the chance to climb up to the heady heights of seventh in the Premier League.

Saints were without their midfield lynchpin Mario Lemina through injury, but Sofiane Boufal was rewarded for his wonder goal against West Brom last weekend with his third start of the season

The Moroccan livewire was quickly into the action, drawing a foul from Dale Stephens 30 yards from the Brighton goal.

Boufal fancied a crack himself, but it was James Ward-Prowse who won that particular argument and launched a curling free-kick which beat home goalkeeper Mat Ryan but crashed back off the crossbar.

Northern Ireland midfielder Davis reacted quicker than a static Brighton defence to adjust his body and nod the ball into the net for his second goal of the season.

Brighton should still have had a spring in their step following their thumping 3-0 win at the London Stadium last time out, but they were strangely lacklustre until a flurry of activity just before half-time.

Jose Izquierdo's cross found Anthony Knockaert sliding in at the far post, but he could only fizz it back across goal.

When the ball found its way back to Knockaert the Frenchman chipped it back in towards Shane Duffy, whose header flew narrowly over the crossbar.

Brighton managed to haul themselves level six minutes after the interval, with summer signing Pascal Gross once again the architect.

The German midfielder has now either scored or made eight of Brighton's 10 goals this season after his deep cross found Murray at the far post.

Murray, who was being unfavourably compared to former Southampton hero Rickie Lambert by the away fans, responded in the best way possible.

He out-jumped full-back Cedric Soares to thump in a header which Saints keeper Fraser Forster, who was perhaps a little slow getting across his goal, got a hand to but could not keep out.

Brighton went in search of a winner, but Izquierdo's fierce drive was blocked by Virgil van Dijk and a low cross from Knockaert was skied by Duffy.