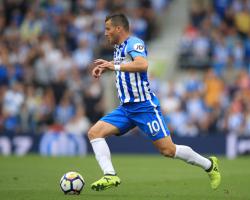 The Israel striker fired the winner in Brighton's 1-0 Premier League victory over Newcastle at the Amex on Sunday, but will face a nervous wait to see if the FA opt to investigate his late tangle with defender Yedlin.

Glenn Murray remains sidelined with an ankle problem and if Hemed were to be hit with a three-match ban, that would further pinch Chris Hughton's Seagulls squad.

Brighton boss Hughton defended his match-winning forward however, insisting the 30-year-old's 89th-minute stamp on Yedlin was a pure accident.

"I have seen it, and my absolute impression was that there was no intention, particularly knowing the player," said Hughton.

"My first impression was that there was absolutely no intent

I was unaware of it at the time, and I have just been shown it."

When asked if he would fear Hemed facing retrospective disciplinary action, Hughton replied: "All I can do is give you my opinion

And that is that there's certainly no intent."

Hemed's second goal of the campaign denied Newcastle the chance to move fourth in the Premier League table, ending the visitors' run of three-straight wins.

"What we saw is what you see in every game," said Hughton, insisting Bruno had not fouled Mbemba.

"It certainly wasn't a foul, but that's the same as what you'll see in any game."

The Spanish manager lamented his side's loose defending for Hemed's goal, but still insisted the strike should have been chalked off by referee Andre Marriner.

"It's a player standing still and he's made a block," said Benitez, claiming Bruno had fouled Mbemba.

"It's a very clear foul, but still we were not defending well."

Hemed apologised to Yedlin for their late tangle, insisting he had not meant to stamp on the Newcastle defender.

"It was by accident," Hemed told Sky Sports

Newcastle star Yedlin moved to defend Hemed, hinting he felt the Brighton star's challenge was unintentional, explaining: "I thought he stamped on my calf; maybe it was accidental."