The veteran forward, now into the third season of his second spell with the Seagulls, has already scored six Premier League goals this campaign as Brighton aim to consolidate their tenure in the top flight.

"It means a lot that the club has shown another year's faith in me. I just want to carry on in the form I'm in at the minute and continue scoring goals at this level for Brighton," a delighted Murray told the club's official website.

"I don't think at any stage of my career I'd have believed I would be getting another contract in the Premier League at this age, but you just never know what can happen in football," he added.

"That's why you've got to remain professional, try your best and keep striving forward. It's very nice to have the security, especially when my family are based here, that's a big thing for me. 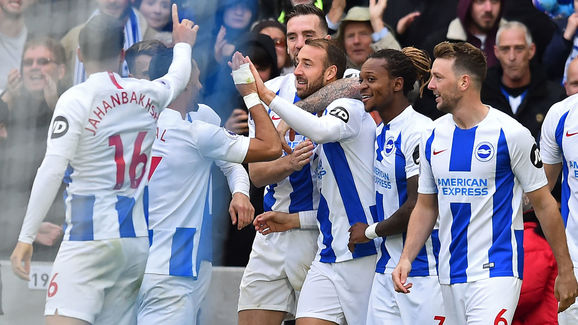 "It wasn't something I was losing sleep over, I was fully focused on the season as a whole and trying to keep Brighton in the Premier League. But it's nice to put the next year to bed and know that I'll be here at the club, hopefully playing in the Premier League again."

Manager Chris Hughton also commented: "We are delighted to have extended Glenn's contract. He has proved a vital member of the team and his goals have been crucial to us.

"Glenn has scored consistently for us, first in helping us win promotion, and now in the Premier League as we seek to establish ourselves at the top level.

"He's proved himself at the very top late in his career, and his professionalism and approach on and off the pitch is a big factor in why he’s still doing it now.

"After recently reaching the 100-goal mark for the club, I know Glenn will be hungry to add more goals to that tally, and I am pleased he's extended his time with the club."

Murray, who assisted with the BBC's live coverage of the FA Cup second round draw on Monday night, previously played for Brighton when the club was in League One. He has since played in the Premier League for both Crystal Palace and Bournemouth before returning for another round at the Amex.