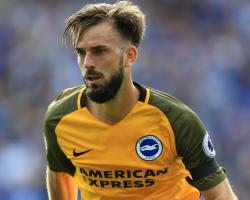 Albion have recruited from across Europe this summer, bringing in eight foreign players with seven different nationalities as they attempt to build a squad capable of competing in the Premier League following promotion.

"Predominately, it's the market - it's certainly not a case of specifically wanting to bring in foreign players over English-based players," the 58-year-old said

"But the market is different and I think what you have to pay for an English player or a player that's playing in the English game, on probably more occasions than not, is more money.

"It's about balancing books and what you can get for your money."

Australian goalkeeper Mathew Ryan, Holland midfielder Davy Propper and winger Izquierdo are the most expensive new arrivals at the Amex Stadium during the past few months

Chelsea loanee Izzy Brown remains the Seagulls' only domestic-based summer signing, although the chances of Ghana forward Raphael Dwamena joining from FC Zurich ended when he failed a medical

"It's just one of the challenges," Hughton said

"What you are going to have with every single one of them is a massive desire to do well.

"What you'd like to think is you're not going to have a player here that's going to want to go through the motions.

"Each one of these players that come are desperate to do well, their first time in the Premier League

They'll want to make a good account of themselves."